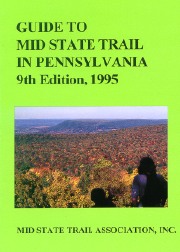 The Mid State Trail  (Link to Guied)(MST) is a wilderness foot path across Pennsylvania from Bedford County in the south to Tioga County in the north. Features of the MST are its many views and side trails, its sense of isolation and remoteness and its use of metric measure. Unique features are the tunnel under Paddy Mountain and a portion of the Great Island Indian Path near Ravens­burg State Park. The latter is believed to be one of only two or three bits of unpaved Indian paths on public lands in Penns Woods. The Mid State Trail Association (Copy write) (MSTA) is an organization of trail overseers and others formed in 1982 and dedicated to the completion and preservation of the Mid State Trail System.

This is the first edition to describe the main trail in both directions. Side trails are still described in only one direction. The trail description is separated into eleven sections divided by paved roads or highways. Crossings of roads that can be navigated by an ordinary car are noted in this guide as intermediate access points. The MST is still a rugged and demanding trail.

The trail is blazed in orange and the side trails are in the normal blue.  The LINK Trail starts at Greenwood Furnace State Park using the Greenwood Spur Trail to connect to the LINK Trail that links up the Mid-state Trail and the Tuscarora Trail.  The Tuscarora Trail was Built at a time When it was thought the A.T. Trail would be lost to land disputes.